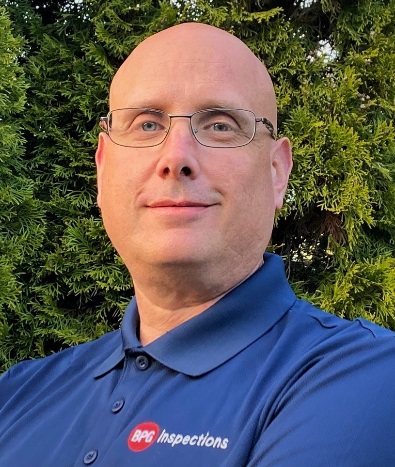 Erick is a native of Washington State and grew up 35 miles east of Seattle at the foothills of the Cascade mountain range.

Erick worked in the residential construction industry, starting as a laborer, working his way up to project manager. In 2011, during a slow time in construction, he attended Aerospace Manufacturing classes which led to a job at Boeing. After a couple years he ultimately decided his heart was in homes. He left Boeing and enrolled in a home inspection course. This resulted in getting a Washington State Home Inspector license, where he has been a home inspector since 2014. He did this for two years before his previous employer asked him to return to work for some home remodels as a project manager. After almost 4 years more in construction, and doing home inspections on the weekends he decided it was time to do home inspections full time in January 2020.

Erick enjoys a variety of activities and hobbies when not inspecting. He volunteers as a coach at the YMCA, umpires for Little League baseball/softball.  He’s an avid sports fan of Seattle Seahawks, Seattle Sounders and Seattle Totems. Erick used to be a competitive swimmer and runs 5ks for various local and national charities. He enjoys spending time with his family at a cabin and hiking the Cascades. He restored a truck that he enters into car shows across the state of Washington; he bought and rebuilt built his first car at 14 years old.

All of his inspections include:

Erick is fabulous and always willing to explain things in detail to his clients, valuable beyond measure!

Erick always does a wonderful job

Very satisfied, Erick talked to us about any issues and or not , very transparent....